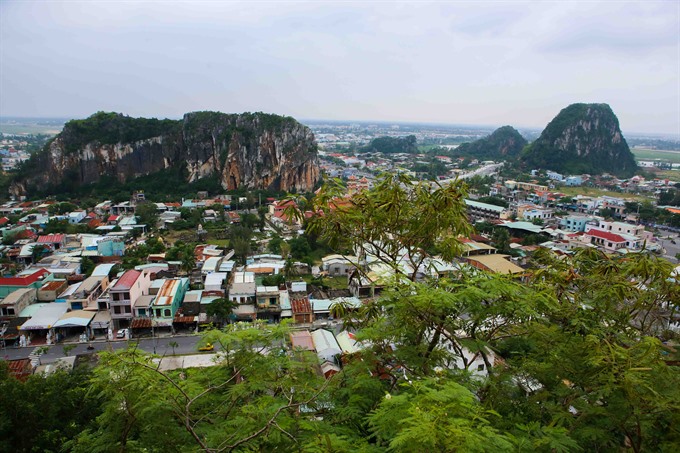 The Ngũ Hành Sơn (Marble Mountains) in Đà Nẵng have been recognised as a National Special Relic, one of 16 approved by the Prime Minister, and the second of its kind in the city. — VNS Photo Trần Lê Lâm

The Ngũ Hành Sơn (Marble Mountains) in the central city of Đà Nẵng have been recognised as a National Special Relic, one of 16 approved by the Prime Minister last December, and the second of its kind in the city.

A ceremony was held at the site on Sunday to mark the recognition.

The site – which features five mountains by a pristine beach in Ngũ Hành Sơn District, 6km southeast of the city centre, was first recognised as a national historical and cultural relic in 1990.

The site was given the name Ngũ Hành Sơn, or Non Nước, by King Minh Mạng under the Nguyễn Dynasty in 1837.

Thủy Sơn Mountain stands 160 metres tall on an area of 15 hectares. Its caves and stalactite formations are the most visited feature of the complex.

Kim Sơn Mountain, the largest of the Marble Mountains, hosts the annual Quán Thế Âm (Avalokitesvara Bodhisattva) Festival – one of the 15 largest events in Việt Nam – at the Đá and Quán Thế Âm pagodas on the 19th day of lunar February. The festival draws around 10,000 residents and tourists each year.

The 400-year-old Non Nước stone sculpture village at the foot of the Marble Mountains has also been recognised as a National Intangible Heritage.

Deputy Minister of Culture, Sports and Tourism Trịnh Thị Thủy appreciated the efforts made by the city to preserve and promote its historical and cultural relics and landscapes.

She also urged the city to protect the special relic in line with socio-economic development and tourism.

Director of the city’s Culture and Sports Department Huỳnh Văn Hùng said the recognition of the relic would help protect it from human activities and booming urbanisation.

Last year, the Điện Hải Citadel in the city was recognised as the first National Special Relic in Đà Nẵng.

Đà Nẵng has listed 50 historical sites and 18 national historical monuments in its restoration project for 2016-20. — VNS