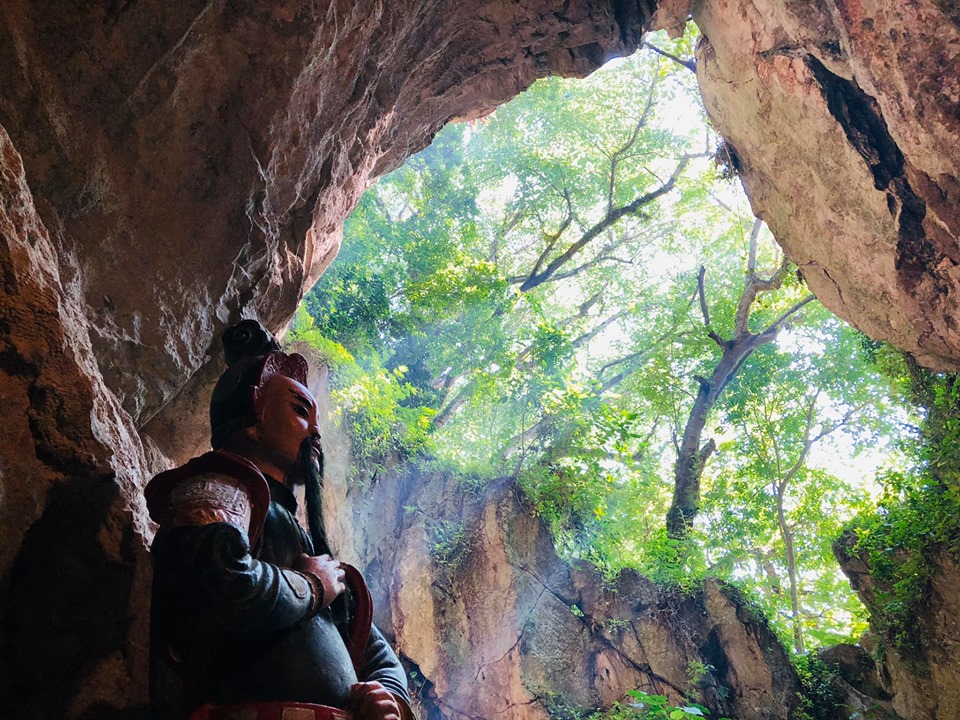 There are various perspectives about a city that has a plentiful identity and it is quite simple that: a city's identity means that specific images about this city can impress in every people's mind.

Vietnam has a long-standing formation process with historic events while municipalities keep growing in all areas. We have the thousand-year capital city named Thang Long - Ha Noi, we have the ancient Imperial city of Hue, the state-of-the-art Ho Chi Minh city which lays the foundations of a new era in the south part of Vietnam, the dynamic port town of Hai Phong and Da Nang - the liveable city in Vietnam. Additionally, there are gorgeous destinations like Hoi An, Da Lat with luxurious European architectural systems and Sapa in the magical cloud...After Da Nang was recognized spectacular changes on a daily basis, shoulder to shoulder with the coastal city, Ngu Hanh Son where has present-day construction and conventional villages - the space surrounded by lofty mountains, foothills, a large river and a white lovely beach. 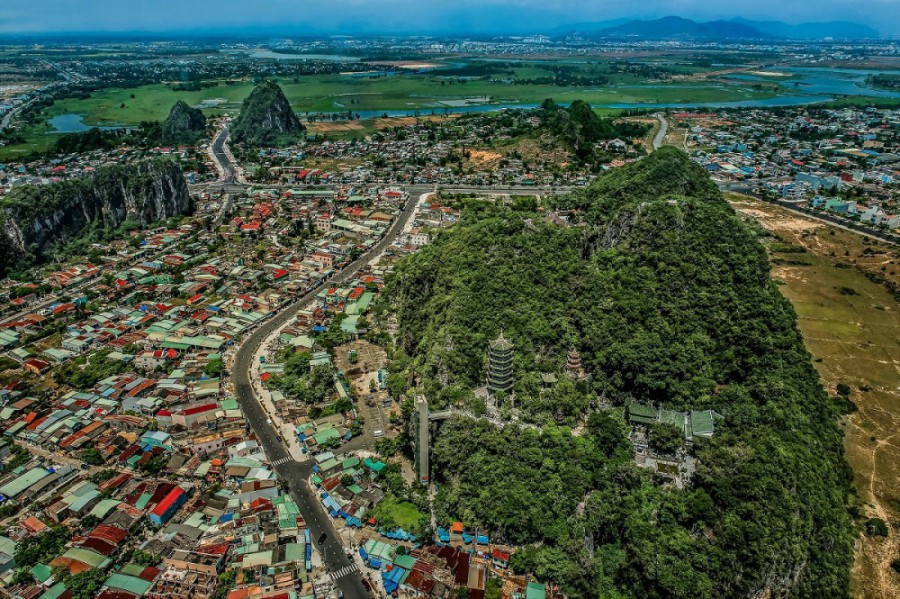 Looking back on golden values which has a great reputation...

The first value that the author recommends is the landscape. There are many legends about the creation of Ngu Hanh Son - the marble mountains such as people believe that mountains in Ngu Hanh Son derived from a dragon's egg in the past. Nowadays, advanced sciences and technologies can explain thoroughly the movement geology of the earth's crust that evolves natural phenomena including the formation of Ngu Hanh. According to history and articles both say nearly 200 years ago, King Minh Mang came there and named mountains depending on the Eight Trigrams, associating with mountains' unique colours: Thuy Son is pink, Moc Son is white, Hoa Son is red, Kim Son is blue and Tho Son is brown. Despite legends of creation, Ngu Hanh Son is a majestic landmark, hiding many magical things which needed to research and discover.

Location is always a factor generating not only fascination but also an exception of landscape value. A perfect location will set up sceneries that are worthy worldwide, it is also a cradle of many precious archives. People frequently tell about unusual things in Non Nuoc like a giant upside-down bell, the gate of heaven, the way to the underworld or a bat cave...cave systems with lots of shapes are insightful features in Thuy Son Mountain. If you want to stay in the upsidedown bell, you can come to Huyen Khong Cave; if you like watching stunning beaches, you can climb up Van Thong Cave; if you love the feeling to become a fairy, playing chess, you can go to Tang Chon Cave and if you find the peaceful feeling to think about the life, Tam Thai Pagoda and Linh Ung Pagoda are the best options. One of the significant element in Ngu Hanh Son is a rare ecosystem: a diverse and rich flora especially a 600-year-old banyan tree, three gledirschia australis in Tang Chon Cave, two terminalia catappa which is in front of Tam Thai Pagoda's gate, a verdant diospyros decandra comes to fruition yearly. On such shifting days, visiting Thuy Son is really a special experience, listening to the sound of footsteps in every corner, the sound of the song without lyrics emanating here like quiet words of the mountains. 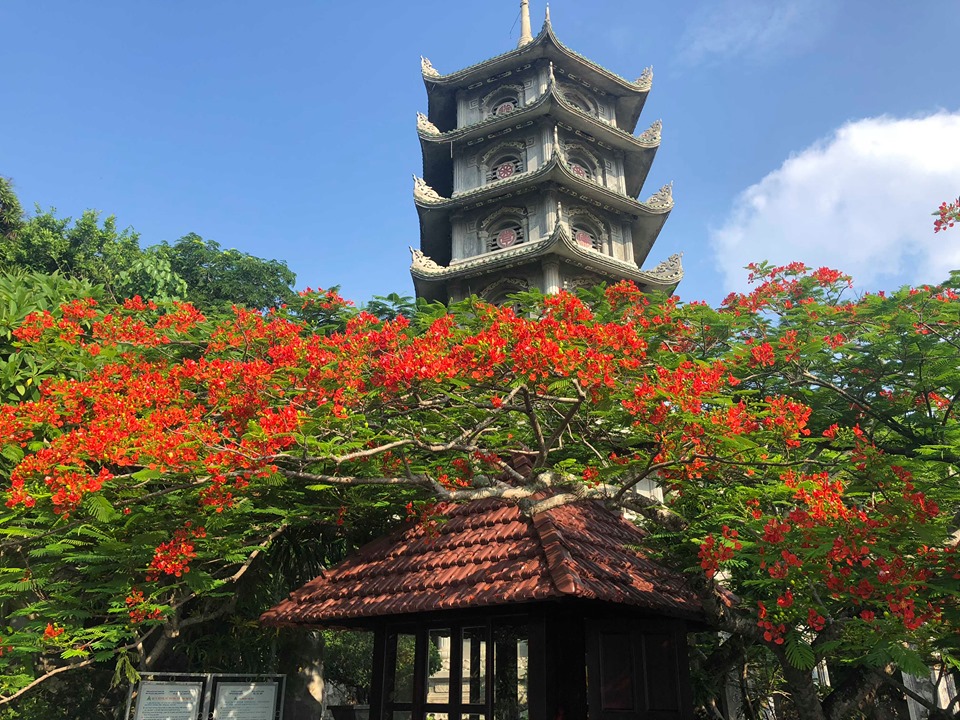 The landscape value lay foundations for the cultural history value in Thuy6 Son. Lost of researches showed that Ngu Hanh Son is not only a centre of residence trade but also a religious centre of Cham people - the native inhabitants in the past. In the 17th century, the Pho Da Son Linh Trung Phat epitaph which is carved in the Hoa Nghiem Cave's cliff mentions many things about Ngu Hanh's name, languages, Viet - Hoa relationship, Buddhism documentaries. Relic systems in Ngu Hanh Son include pagodas, towers, hundreds of priceless antiques contains Vietnamese's relief, Chinese's trust such as Buddhism, Taoism, Brahmanism reflecting clearly the cultural exchanges process and acculturation of Vietnamese culture.

Additionally, stone sculpture in Non Nuoc is recognized as an Intangible Cultural Heritage of Vietnam with skilful " stroke" in stones. Although this village has been organized into its own area, nowadays, on the Huyen Tran Cong Chua street, in many small alleys, we can hear the sound of saws, chisels that echo in the space. Besides, Quan The Am Festival in Ngu Hanh Son is certainly prominent. This festival is a prayer for people and good weather. Every 19/2 of the lunar calendar, the festival is held on a larger scale in both the content and the form attracting, a numerous number of believers and tourists that arouses people's patriotism

" Heritage systems are the basis for formation and development of tourism products especially ecotourism and cultural tourism, contributing to making Vietnam one of the tourist hubs of Asia, attracting increasingly international tourists to Vietnam great income to the national economy" - according to the opinion of PhD Le Trong Binh - Tourism Development Research Institute about using heritages to expand tourism. For countries and territories which have a cultural depth measured by a dense heritage system like our country, heritage tourism becomes one of the remarkable strengths. Nowadays, heritage tourism focus on visitors looking for interaction and experience values to absorb the cultural values of ethnic groups. It can be said that tourism has promoted the protection of the cultural country. The tourists' needs motivate the government and residents to appreciate, preserve heritage systems.

Historical and cultural relics system come from the past, but not just the past, in order to the past always be alive, it is necessary to carry the breath of the times. Heritages conversation and economic development are two sides of sustainable development. We easily see the fact that the crucial balance for sustainable development is a balance between the past and the present, artificial and natural factors, between the desire to reach the future and looking back on the past. The urban rebuilding process makes us feel regret. It is the regret of losing architectures which were built during the French colonial period and many works with unique architectural styles on streets like Bach Dang, Tran Phu, Le Loi...are destroying or changing the function..certainly, none of us can forget the image when the fire broke out and completely burned the bell rower and the roof of Notre Dame Cathedral - the French people's soul was burned. People realized that Notre- Dame de Paris is not only a cathedral but also a wonderful symbol of human cultural heritage. Obsessed with the writings written 188 years ago by the great writer V.Hugo, everyone was shocked to see the fire permanently ruining the place where the handicapped bell-puller Quasimodo had saved the girl named Esmeralda with great love. 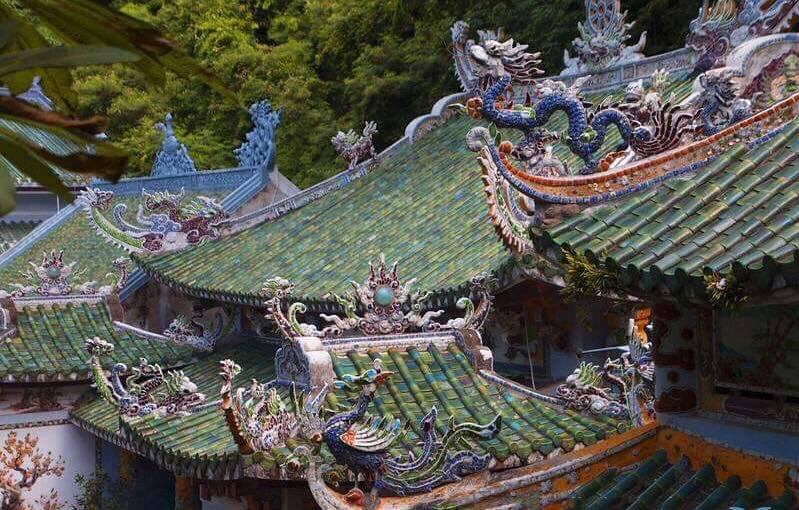 Understanding the importance and invaluable value of the Marble Mountains, with the preservation of the Management Board Ngu Hanh Son Tourist Area, Non Nuoc has many changes including Huyen Khong Cave is upgraded, stelae were restores, Loc Uyen garden on Linh Ung Pagoda was renovated, the way to the top of Thuong Thai was cleared...Because of inevitable abrasion of nature, the Management Board has put emphasis on preservation such as try to defend Champa artefacts including Chiem Thanh Temple in Tang Chon Cave, two sandstone pillars on the way to Tam Thai Pagoda, linga-yoni statue in Tang Chon Cave, the Goddess Po Inu Naga statue in Huyen Khong Cave, Huyen Khong Cave's background is paved with Cham bricks...that vividly reflect a period of ancestors.

Today, receiving new opportunities, our city continues to integrate deeply, we cannot deny the trends of contemporary architectures and the advancement of technology in the 4.0 era. However, Ngu Hanh Son in general as well as Thuy Son Mountain in particular with its own identity is always a poetic image of majestic mountains and stunning beaches.