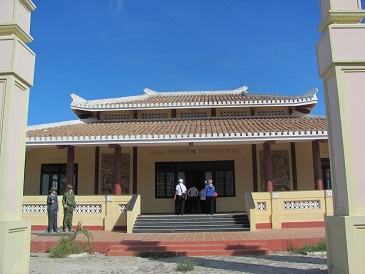 “K20” was a countersign named by District Party Committee of The District 3 (Da Nang city) to contact during the war against American Empire. The revolutionary Base “K20” is located in the residential quarter “Da Man 5” belonged to Khue My Ward, Ngu Hanh Son District, Da Nang city. It is about 5 Kms to the southeast from city center. To the north, it has a border with the street named urban planning No 4 in the south of Tuyen Son Bridge; to the west bordering with Tran Hung Dao street; to the south bordering with a remote street with the power-line 110 KWs. With the area of over 6 hectares, there is a few of residents, around 200 households, living here and they gather together into small hamlets in the lowland to the south to conveniently grown rice and farm-produce.

On the 6th September, 2010, Minister of Ministry of Culture, Sport, and Tourism issued the decree No 3068 of ranking The National Relic for the revolutionary Base “K20” in Khue My Ward, Ngu Hanh Son District, Da Nang city. During the war of resistance against American Empire to save the country, the base is a symbol of Da Nang people’s dauntless and indomitable revolutionary spirit in general and Ngu Hanh Son people’s in particular. It was a secret and typical base located in the center of enemy zone, one of the most important bases of Da Nang city at that time. Vietnamese soldier and guerrilla considered it as a subarea of battle for making a jumping-off place to attack to the bases of American Empire and the South Government; and these made lots of great wins known widely in the battle of military zone No 5; and together with people all over the Country, these also partly contributed to the triumph in the spring in 1975. The four places in this revolutionary base “K20” were ranked to four National Historical Relics by Ministry of Culture, Sport, and Tourism, such as Mrs. Nhieu’s ancestral house, Mr. Huynh Phien’s house (so called “Mr. Van”), Mr. Huynh Trung’s, and the “Huynh” clan ancestral house.

At that time, bordering with Hoa Vang District and Da Nang City, Da Man was an important military region for American Empire because it was a gateway to prevent Vietnamese revolutionary force and also a point to protect the city center from the southeast attack; Therefore, Da Man had an important strategic location for both sides. After The Geneva Conference (April 26 – July 20, 1954), There were a lot of posts built around Da Man base by the American Empire and Ngo Dinh Diem Government; and this made a self-contained military perimeter. They also set up a cruel government system to control the residents here and prevent revolutionary force from outside attack. However, Da Man People in particular and Bac My An people in general are always believe Communist Party and its’ leading to against the enemy.

In January 1965, Politburo standing of District Committee of District 3 assigned 4 cadres more to come to Da Man for directly leading revolutionary movement. Organization of City Committee of Da Nang was moved to Ba Nhieu’s ancestral house. On 8th of March 1965 when American Empire brought Expeditionary Force in the south of Vietnam, they built the air port for helicopter named “Nuoc Man” near Da Man base and set up a large amount of American and puppet armies here. At that time, Da Man’s population was about 400 people whilst 6000 armies of American and the South Government force garrisoned in Bac My An area; although enemy set up such a large amount of armies, revolutionary base were still safe. Revolutionary cadres and local people were closely united and 24 hours adhering to protect the base. In the late of October 1965, together with local people, Da Man guerrilla force combined with battalion of special force No 89 to attack Nuoc Man Air port Zone. As a result, 106 helicopters were destroyed and around 400 soldiers were killed and wounded.

Beside struggle by military forces, Da Man people organized lots of directly political struggle with enemy; against gathering local people to set up the strategic hamlet program (a plan by the government of South Vietnam and American Empire during the Vietnam War to combat the communist insurgency by pacifying the countryside and reducing the influence of the communists among the rural population), against razing graves, forcing  joining army upon local people; and calling upon Vietnamese soldiers following enemy back to Revolutionary force. Especially, when receiving the information that our beloved Uncle Ho (Ho Chi Minh President) passed away on 2nd September 1969 in Ha Noi Capital, Da Man People organized successfully funeral ceremony at Khue Bac pagoda on 8th September 1969; and small pieces of mourning silk were worn on every local people even the enemy strictly control this area. From 1964 to 1975, Da Man self-defense force and guerrilla together with the force of Bac My An ward had carried out 28 small and big battles; as a result, informers, spies, cruel men were killed. Also at that time, Da Man’s people dig 124 out of 175 secret shelter-pits in Bac My An Ward. This was a great achievement of Da Man people and cadres, under the leading of Da Man Party Cell, District Party Committee of District 3, and City Party Committee of Da Nang.

During the period of revolutionary struggle, cadres and Da Man’s People had been completely loyal to Communist Party, indomitable against enemy, and contributed their property and lives to career of revolution and country until the day of wholly triumph.

Nowadays, when visiting the revolutionary base “K20”, we will go to see Mrs. Nhieu’s ancestral house with secret shelter-pit in the yard, the others in Mrs.  Nguyen Thi Hai’s house, Mr. Huynh Trung’s, Mr. Ly’s, etc…which had been respectfully preserved. Especially, local government and people built a traditionally historical house where valuable autographs, documents, objects are stored in; these are lively pages of history which clearly reflect heroic revolutionary tradition of people in “K20”. The highlight addresses, secret shelter-pits, old combat trenches are being introduced in traditional education and tourism programs. Each of objects, stories are related with real persons; and some of them are still alive and are working to contribute a better life in this historical land.