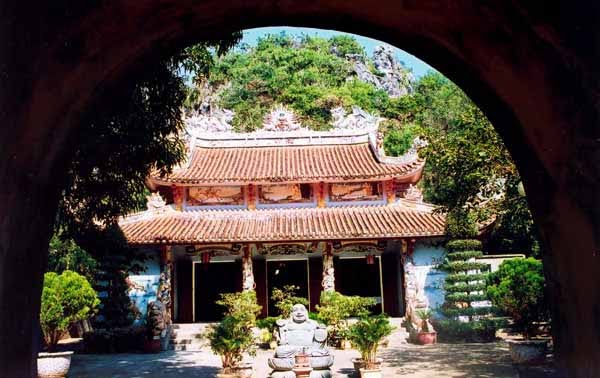 Ending stepping 156 stairs in the southwest of Thuy Son mount, visitors will see an ancient pagoda “Tam Thai” and gate “Tam Quan” with moss-covered walls. The pagoda is located at flat area with the perimeter of 200 meters.

According to ancient documents and stone stele, an ancient pagoda “Tam Thai” was built when Hoi An Ancient Town had been established. The monk Hung Lien followings the Zen of Tao Dong from China came this mountain to stay in the years of late 16th century. In 1825, Tam Thai pagoda was conferred a national pagoda by King Minh Mang. Up to now, there have been 12 senior monks staying in this pagoda.

According to Thich Dai San’s oversea memoir, an honored guest of Lord Nguyen Phuc Chu (1691-1725) visited this pagoda on his way back to China in 1695. This evidence showed that it was built at least 300 years ago.

The Tam Quan ancient gate with moss-covered walls in front of the pagoda consists of 3 entrances; under the regulation of feudalism, the main entrance (the highest and most important one) in the middle was for king, mandarins, monks, on the left for men, on the right for women.

It was a thatched pagoda until King Ming Mang had pagoda rebuilt with bricks and tiles in 1825 on a journey of investigation of Thuy Son Mountain and conferred national pagoda and also named it “Tam Thai”.  In 1901, a violent typhoon devastated the whole pagoda. Until 1907 it was reconstructed with the contributions and donations of Buddhists and remained up to present.

Princess Ngoc Lan, King Minh Mang’s younger sister, went to the pagoda to study Buddhism and then she moved to Pho Da Son pagoda next to Hoa Son (Mountain of Fire) to stay for her whole life. During two resistances against American Empire and French Colonialism, the pagoda was a place for patriotism feudal intellectuals movements (Can Vuong, Duy Tan, against Tax movement) and the uprising “Vietnam Quang Phuc” of Le Ba Trinh, Huynh Ba Chanh, Nguyen Duy Hieu, to held a meeting and it was also a place for Province Party Committee of Quang Nam - Da Nang to have an important discussion.

Nowadays, there is still a fire burning heart-shaped bronze medal with King Ming Mang’s writing at the altar behind the main part of the pagoda. It tells about the mercy of Buddhism. Besides, the horizontal lacquered boards given by King Minh Mang are also stored in the pagoda. North of the forecourt of Tam Thai pagoda is Hanh Cung where King Minh Mang and Nguyen Dynasty’s mandarins used to rest when visiting the pagoda for wishing his country was prosperity.

Time by time, the pagoda had been heavily damaged by wars and disasters; it was also restored several times. Since the biggest restoration in 1995, the original ancient architecture of royal tomb and temple from Hue Imperial Citadel has been being maintained.